Brace yourself. The response above is typical the first time someone spots an image captured from Hocking Hills State Park in southern Ohio. After all, when most people think of the Buckeye State, secluded gorges and brilliant waterfalls aren’t the first images they conjure up.

And while that’s true for much of the region, just an hour’s drive south of Columbus delivers you to a magical little corner of the state that seems like it must have materialized from the pages of a storybook. 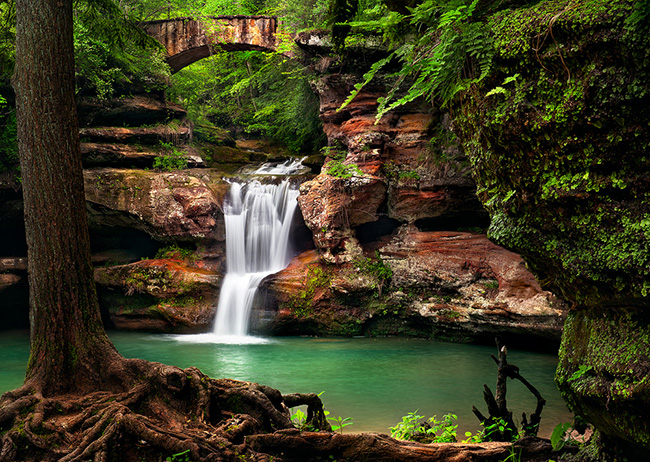 The Hocking Hills region is what remains of an ancient seabed formed millions of years ago. As the waters receded and the sediment solidified, it left behind three distinct layers.

The resulting landscape is a photographer’s paradise of deep gorges, spellbinding waterfalls, and breathtaking recess caves. And they’re all within a short distance of each other (four of the waterfalls are along a stretch that’s less than a mile in length). 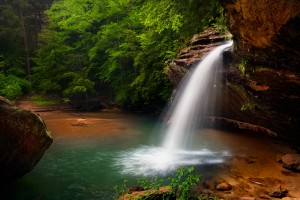 The entire area is incredibly photogenic, and the urge to grab your camera and pop the shutter is virtually irresistible. As you hike along the bottom of the gorge and the creek burbles at your feet, you can’t help but get inspired to put some of that magic on your memory cards.

Hocking Hills State Park is the hub of the region and I recommend planning at least two days to explore.

Start your adventure in the Old Man’s Cave area, making certain to take the side trip to Cedar Falls and Ash Cave (you can drive or opt for a scenic six-mile hike). After you’ve feasted your glass on that area, head to the Rock Bridge, Rock House, Cantwell Cliffs, and Conkle’s Hollow areas for even more sensor candy.

The best time of year is generally late spring to early summer. The fresh, new vegetation adds a rich lushness to your photos and there’s typically a nice volume of water tumbling over the rock faces.

That said, the opportunity for spectacular photos is limited more by water flow than the time of year. It’s not uncommon for the waterfalls to occasionally run dry, particularly from late August till winter. Conversely, too much water in early spring obscures the subtle details in the falls and renders the water a muddy shade of brown. 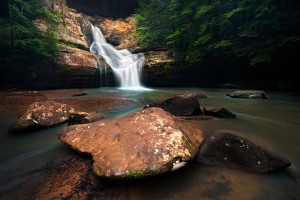 Ideally, watch the weather and try to hit the park just after a good rainfall (particularly if your trip is later in the summer). The waterfalls tend to look their best about 24 hours after a good downpour.

I know, sometimes planning a trip around the weather is tricky at best, but the good news is that as long as there’s water of some kind (low or high volume), you’ll discover a waterfall that looks good in those conditions.

The next consideration is the time of day. I’ve found over the years that early morning works best for a couple reasons.

First, the photographic conditions are fantastic. Soft, even light prevails for up to an hour after sunrise simply because the sun isn’t high enough to peek into the gorges till then. It’s also common to have misty or foggy conditions present as the day breaks, adding an aura of mystery to your images.

The second consideration is the tourists. Like most popular parks, Hocking Hills sees its share of visitors – 3 million each year, give or take. So, it does get congested during the day and it’s not unusual for intrepid sightseers to wander into your frame.

Early risers enjoy relative solitude from the masses and the freedom to make their shot unencumbered by crowds. 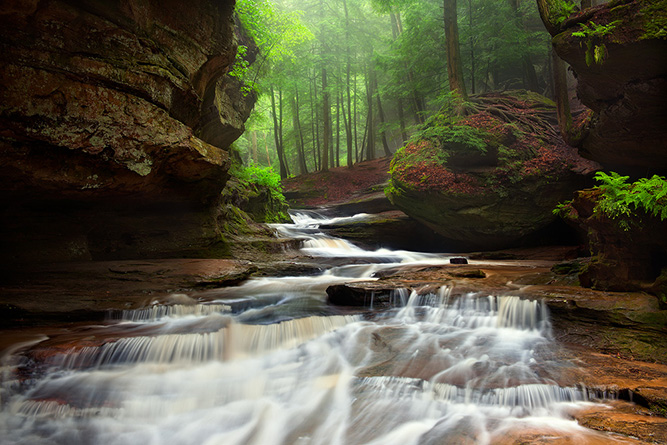 If you can’t make early morning, evenings are your next best bet. Although not deserted, the teeming crowds tend to thin down and the light is just as good.

Now, before you strap on the boots and eagerly march down to the gorge, a quick word of caution is in order. Cliffs, drop-offs, and slimy rocks are all waiting to ambush the unsuspecting photographer who carelessly puts a boot in the wrong place. Gravity works fairly well in Hocking Hills and they have the fatalities to prove it.

The shooting experience is fairly straightforward, but I’ll toss in some recommendations to get you started.

Equipment is pretty easy. A DSLR and a 24-70 (35mm equivalent) will cover the majority of your shots. I’ve also had good luck going wider, but only very occasionally find myself wanting longer than 100 – 120mm.

A good, sturdy tripod and polarizer are just about mandatory, and I wouldn’t be afraid to load a neutral density filter into my pack. 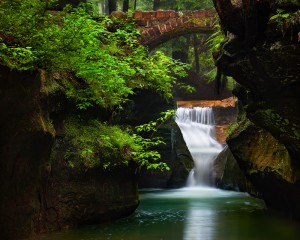 First, sunny, midday skies are not your friend. Deep in the gorges, they create painfully extreme ranges in exposure that make even the HDR

crowd cringe. You’ll get a frustrating variety of blown out highlights and deep, black shadows. An overcast day lends itself to an all day shoot; otherwise, plan to stick with morning and evening.

I prefer my rushing water to render as more of a silky, elegant flow, so I tend to favor shutter speeds at 1/2 of a second or slower. If you’re struggling with dropping your shutter speed, a solid neutral density filter comes in handy.

I highly recommend using a polarizer to knock the reflection off leaves, wet rocks, and the water. The rich colors a polarizer pulls out of this area are dramatic to say the least. 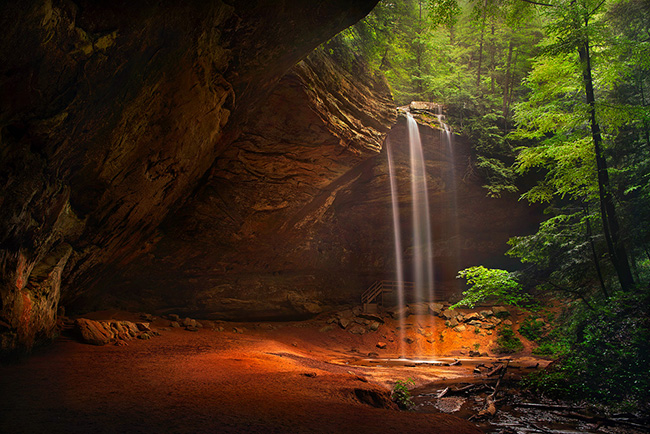 Overall, I think the most challenging aspect of capturing images in Hocking Hills is resisting the urge to smack the tripod down, shoot the first thing you see, and rush to the next target.

Instead, take your time and soak it all in. Make sure you try to “work” the subject as much as possible, trying all the angles. I’ve discovered over the years that the seemingly obvious composition is seldom the best one.

Remember to hunt for good foreground objects, try different tripod heights, and hone in on what attracted you to the scene in the first place. After well over a dozen trips I know I’m still discovering exciting, new compositions each time I visit.

Finally, I need to warn you, once you get your first taste of this enchanting area, you’ll want to come back again and again. I know I’m heading down this summer, maybe I’ll see you there.

PS – If you enjoy these articles, you’ll really love my e-book, Secrets To Stunning Wildlife Photography. It’s 290 pages of field-tested tips, tricks, and advice for getting amazing wildlife photos on your memory cards. Thousands have already ordered, click here to check it out for yourself. I know you’ll love it!

Steve these images are spectacular. I am looking forward to another trip to Hocking Hills. Coming to live from KY. I’ll see you Somewhere Down The Road.

Really nice pictures, but I don’t buy into the millions of years commentary, I rather give God the Glory for His creation. Around 6,000 years.

I’m a Bible kind of guy too but it does NOT say 6,000 years or any time frame for that matter. Read what it says but don’t add anything or make too many assumptions.

I need to point out that over-all Im pretty taken with this web-site. Its very clear that you are aware of your subject matter and you are enthusiastic about it. I wish I possessed your ability to post. I have saved your blog and look ahead to additional posts.
emu boots canada http://emu.ttravelmint.com

what falls is this in hocking hills, i didnt see any there that had the bridge in an alignment to get both the falls and a bridge..we are in grafton wv with our grandpa , but grandma is from chancey ohio and we may go back to the park saturday..
would love to see the falls in your picture with the bridge

I just love your pictures. I have a lot on my old computer and am now adding them to this one. One is my all time favourite and have it as my picture on Facebook. I’ve even posted on there where I get it from I really hope you don’t mind.

No problem – thanks for the kind words and enjoy!